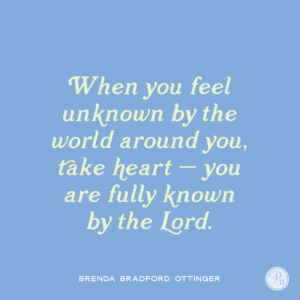 Songs of soft praise laced with the warm scent of coffee hovered in the air as cheerful ladies trickled through the doors and walked toward the sound of their names, beckoned by familiar voices.

I was new in town and had barely talked myself into attending the Ladies’ Night at church, where no one knew my name.

As I scanned the clusters of women laughing and nodding with familiarity, I quietly hoped someone would invite me into their circle of conversation.

More than anything that night, I longed to feel known.

That evening is now a bygone memory, but even today, after two years of social distancing, I find myself longing to know and feel known in more intimate ways again.

Whether we’re new to a group, a job, or a season of life, whether we’re the introverts who struggle to reach out or the ones who’ve been through so much that we’re unsure who to trust and let in, a common cry of the human heart is to feel known.

Recently, a verse I’d once overlooked in the Bible captured my heart. Three days after Jesus’ crucifixion, Mary Magdalene, a friend and follower of Jesus, returned to His tomb to anoint His body with burial spices, but to her troubled surprise, she found an empty grave.

As Mary turned to walk away, she saw Jesus standing there, and not recognizing Him in His resurrected state, Mary mistook the risen Savior for a gardener, saying, “Sir … if you have taken him away, tell me where you have put him, and I will go and get him” (John 20:15d, NLT).

The One whom Mary had sought among the dead now breathed her name into the sunrise of a glorious new day!

Immediately, Mary’s heart recognized what her eyes had failed to see. The voice that had rescued her, casting seven evil spirits from her (Luke 8:2)—the voice of the One she followed, served, loved—called her by name. Jesus knew her name, and she knew His voice.

When reading this passage before, I’d only considered that Mary was the first to witness the resurrected Jesus. Now, for the first time, I consider what it must have been like for Mary to hear the voice of Jesus uttering her name.

Yet this wasn’t an unfamiliar sound for Mary. “Rabboni,” the term she shouts upon recognizing Jesus, is a more personal reference for “teacher,” less formal than the title “rabbi.” Since the day she met Jesus, Mary faithfully followed Him, which wasn’t simply a figure of speech; she was among a group of believers who actually followed Jesus from town to town, supporting Him and His disciples.

Because Mary had spent so much time with Jesus, she instantly recognized the sound of her name on His lips. Likewise, the more time we spend with Jesus in prayer and in His Word, the more our ears are tuned to His voice in our lives. Oh, to know Him more.

Closing my eyes, I place my name in this verse where Mary’s appears and listen as the tender voice of the risen Savior speaks every syllable of my name. Suddenly, the longing to feel known is quelled by the reminder that I’m intimately known by the One who overpowered death and walked out of that grave victorious, so I could spend eternity in heaven with Him. (John 3:16; Matthew 28:6-7; Romans 5)

Oh, sweet friend, when you feel unknown by the world around you, take heart—you are fully known and altogether adored by the Lord.

Close your eyes; listen as the voice of the Savior tenderly breathes every syllable of your name into your spirit today.

Are you feeling disconnected and unknown right now, friend?
How does believing you’re known by Jesus soothe your spirit today?
We’d love for you to join the conversation over at Proverbs 31 Ministries! ♥

« Letting Go of Clutter and Holding On to Peace 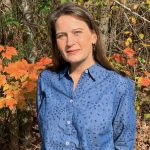 Too many years I spent not understanding my worth

A few projects I worked on this winter. (With a fe

Friend, are you like me & feeling a little disconn