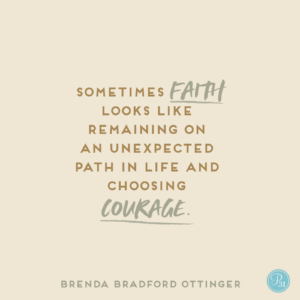 Short on time and long on haste, I jotted a nearby address into my car’s GPS one morning and, to my surprise, the highlighted route stretched wide across the dashboard map.

What ever happened to the shortest distance between two points being a straight line?, I thought, as I backed out of the driveway.

But as my pace calmed and reason returned, I considered how glad I was to be guided along the rambling paved route, rather than the short straight line through a forest of pine trees where no path exists.

And it occurred to me that day that straight lines in life are rare.

So often I’ve wanted to navigate my own route, bypassing the bends and back-roads of life, seeking a direct path to my plans—when God hasn’t paved a way for them yet.

As a result, I’ve spent miles of life recalculating, circling in confusion, fearful to move along unfamiliar paths.

Yet, I’ve come to realize that straight lines aren’t always a thing in God’s navigational system either. God’s way is often a winding path paved on the waters of faith.

Consider Peter: he and some of Jesus’s other disciples had spent the evening with Jesus, healing and miraculously feeding a crowd of over 5,000. As the disciples rowed home across the lake, a sudden storm stirred up, and with their oars struggling against the waves, they looked up and saw Jesus walking toward them on the surface of the water. Peter called, “Lord, if it is really you, tell me to come to you, walking on the water.” “Yes, come,” Jesus said. So Peter went over to the side of the boat and walked on the water toward Jesus.” (Matthew 14:14-29)

Peter’s testimony of faith that day wasn’t simply in his toes strolling through the salty sea, but in his acceptance of a holy invitation to join Jesus on an unconventional path.

In that moment, Peter didn’t walk on shallow waters where his feet could catch the sandy shores of security. Rather, Jesus invited Peter to walk in the deep—and that’s His invitation to us, as well.

The path He leads us on is often a winding, meandering route on the waves of life, not the simple straight line we might choose. But, just as Jesus calmed His disciples with the comfort of His presence that night, He does this same for us: “Don’t be afraid,” he said. “Take courage. I am here!” (Matthew 14:27)

Friend, even when God’s plan for us feels long and divergent, take heart—He’s here, ordering every mile as we release our routes and join Him on the path He prepared in advance for us. (Ephesians 2:10)

Sometimes faith looks like remaining on an unexpected path in life and choosing courage, resting in the assurance that the Guide of our lives will never lead us where His presence won’t meet us.

For, at its very essence, faith is a strong sanctuary for our spirits, bridging the gap between the known and unknown, freeing us to rest in the God who’s with us.

As we rush toward plans we long for, eager to bypass unexpected routes, may we quiet our bustling spirits and press into the tender leadership of God.

And when those times come along when our faith begins to sink, as Peter’s eventually did that night, and we’re distracted by the storms of life—even still—the very same Jesus who remained beside Peter to lift him up, remains beside us, ready to answer our cries for help. (Matthew 14:30-33)

So often I can identify with Peter, torn between the faith to walk on waves with God, and the fear of following paths unknown.

But, day by day, as we lay our lives bare before God in prayer and shelter our hearts in His Word, our courage grows and fear surrenders to faith.

How has God met you along unexpected paths in your life?
We’d love to hear your story over at Proverbs 31 Ministries today. 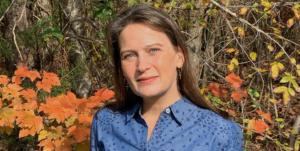 As I sit here, now seven days into being sick, I s